Welcome to the East Coast: Three Takeaways From the 2019 Seed to Sale Show

Welcome to the East Coast: Three Takeaways From the 2019 Seed to Sale Show

This year, the NCIA Seed to Sale Show moved from West to East. The third annual event, historically held in Denver, took place in Boston last week and drew a crowd of exhibitors and attendees eager to participate in the Eastern expansion of the cannabis industry. With legal adult-use sales finally underway in Massachusetts, a coast-to-coast regulated recreational retail market is now a reality. With that, more Eastern states are taking steps to evolve their current cannabis regulations and continue to inch toward eventual adult-use cannabis legalization and retail sales. Here are three East coast takeaways from the event:

The cannabis revolution is no longer a Western U.S. phenomenon. Massachusetts saw $24M in sales and brought in $4M in tax revenue during the first two months of legal cannabis sales, with seven stores open for adult-use sales during that period (the state’s eighth and ninth recreational retail stores have since commenced operations, and currently 49 RMDs are approved for medical sales). It’s worth noting the density of the Northeast market: the state’s nine stores represent the only adult–use retail options in the entire Eastern U.S. and have drawn traffic from throughout the Northeast. In fact, the Massachusetts stores are quite evenly dispersed throughout the state (Figure 1), providing access to consumers from New York, Connecticut, Rhode Island, Vermont, New Hampshire, and Maine (though both VT and ME have legalized cannabis for recreational use, VT has not yet legalized retail sales and ME has experienced regulatory setbacks that have delayed implementation of a recreational retail program). Geographically, the region is primed for potential longevity and market share: the concentration of people, money, and licenses makes it easier for multi-state operators to move staff (and consumers) from store to store and maintain consistent standards. In addition, the geographical concentration will likely inspire surrounding states to hasten the advancement of their cannabis regulations to secure a spot in the marketplace – lest they be an “island of prohibition” and thus risk losing revenue and tax dollars to surrounding legal states. For now, in Massachusetts, the Cannabis Control Commission (CCC) issued its 100th adult-use retail license in late January, and anticipates between four and eight store openings per month going forward. MA adult-use spending to hit $292M, and $918M by 2022 (Figure 2) – positioning the state among the largest adult-use markets. 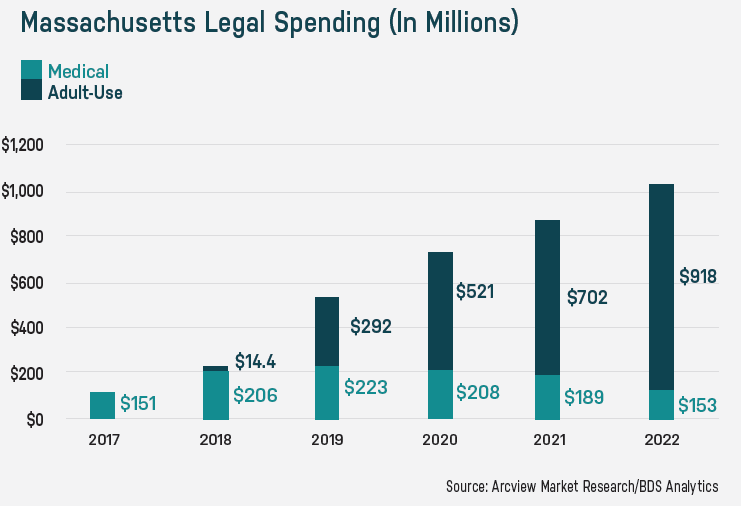 Equity initiatives are top-of-mind, but impact is lacking thus far. The development of the legal cannabis industry presents a valuable opportunity to get diversity and inclusion right from the start. Though Massachusetts is the tenth state to legalize cannabis for recreational use, it has been the first to legally mandate equity provisions as part of its adult-use legislation. Despite the good intentions, putting equity mandates into action has been clunky at best. The demographic makeup of the current MA license-holders is decidedly not diverse, though the state continues to make adjustments that will hopefully lead to more opportunity for those disproportionately impacted by cannabis prohibition and enforcement. Once regulations are in place, home delivery and social consumption – a trend that BDS Analytics has called out for 2019 – could play an important role here. During a keynote chat with NCIA Executive Director Aaron Smith, CCC Chairman Steve Hoffman noted that there is talk of limiting those licenses to equity applicants (an option that has been recommended by the MA Cannabis Advisory Board). Massachusetts has the chance to be a leader in the equity space: if the state’s equity program can be refined and effectively implemented, it could serve as an outline for other states in the Northeast and throughout the country.

The industry continues to be validated. The cannabis industry’s coast-to-coast expansion and continued advancement throughout the rest of the country has coincided with increased presence in – and validation from – mainstream culture. Last week alone, industry headlines touted political moves to bring cannabis into the mainstream (the Congressional hearing on banking reform), as well as ancillary industry participation from “traditional” retail players (Barney’s luxury cannabis-themed store-within-a-store concept, Green Growth Brands’ agreement with Simon Property Group to open 108 CBD shops in malls throughout the U.S.). Undoubtedly, more individuals and companies will continue to participate in and endorse the industry over the course of the year. Mainstream acceptance, de-stigmatization, and validation can largely be considered a win for the industry and for consumers, who will benefit from more choice and tailored options – especially as brands begin to move into the emerging Eastern markets. This increasingly secure mainstream footing is not without some watch-outs, however. BDS Analytics CEO Roy Bingham noted in his standing-room-only Seed to Sale breakout session that overhype can be an issue – particularly when it comes to CBD, where there still is a lack of understanding around the compound and its effects. Here, messaging and education will be crucial points of differentiation for products and brands – especially.

As the cannabis industry moves West to East, so is BDS Analytics. Be on the lookout for continued covering of emerging markets and its consumers, and for Eastern U.S. retail data coming soon to GreenEdge in 2019!