Cannabinoid beverages are a hot topic, drawing considerable attention from both existing legal cannabis players and participants in the broader consumer packaged goods markets. Total spending on legal cannabis in the United States is set to more than double to $34.5 billion by 2025—and the edibles product category, including beverages, is outpacing that rise considerably. In Canada, where edibles just made their debut late last year, the category is growing much faster than the overall market, which is forecast to reach $6.1 billion in 2025.

BDSA delved into the details of the cannabinoid beverage market in its “Drink: Insights into the US & CAN Cannabis Beverage Market” webinar, presented Dec. 8 to 302 viewers. BDSA’s Kelly Nielsen was joined by industry expert panelists Luke Anderson of Cann, Lori Hatcher of Truss Beverages and Jeremy Marshall of Lagunitas.

Candy accounts for the lion’s share of edibles spending, as discussed in part one of this three-part webinar series. Beverages hold a lesser but still significant share. In the U.S., beverages account for about 5% of total edibles sales. In Alberta and British Columbia, where BDSA has recently established retail sales tracking, beverages’ share of edibles spending has risen quickly: from 3% in January to 23% in October—though that share will likely decline as Canada’s new derivative product market stabilizes over the next year or so. 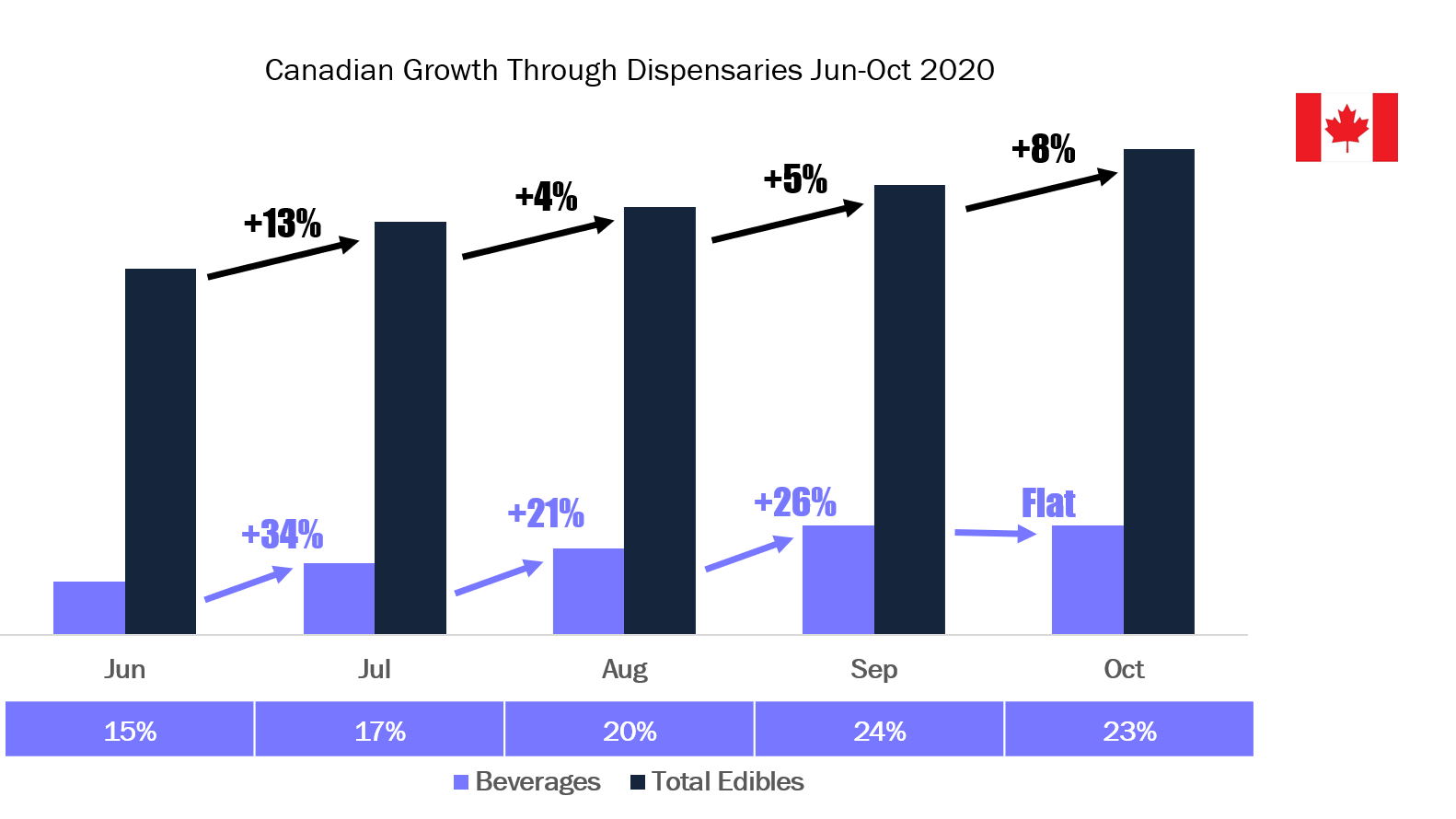 In the U.S., 19% of cannabis Consumers* consume beverages, according to BDSA Consumer Insights’ survey of adults 21+ in fully legal states conducted in the first quarter of 2020. Of those, 8% prefer beverages to other types of cannabis products. In Canada, 10% of Consumers consume beverages and 3% prefer them to other products. In Canada, 57% consume edibles and 30% prefer edibles products to others.

But, as with other edibles products, there is even more potential awaiting cannabinoid beverages in the general retail markets—through non-psychoactive cannabinoids such as cannabidiol (CBD), found naturally in both cannabis and hemp—which is technically also cannabis, but legally defined as cannabis containing very low levels of tetrahydrocannabinol (THC) (<0.3% THC in the U.S.) BDSA forecasts CBD beverages in general retail to account for 6% of spending in 2021, growing to 10% in 2025.

BDSA’s “Drink” webinar was the second in a three-part series called “Eat, Drink and be Merry.” The third, titled “BE MERRY: Consumer Segments and Need States,” will be held Dec. 18.

*BDSA defines Consumers as respondents that say they have consumed cannabis in the past six months.