BDSA estimates that total legal cannabis spending in Canada reached more than $2.6 billion in 2020, based on BDSA’s Canadian retail sales tracking and available government data through February. That is slightly higher than BDSA’s previous forecast of $2.5 billion—which was intentionally conservative in anticipation of impact from the COVID-19 pandemic. As in the United States, however, Canada’s legal cannabis industry saw only limited, short-term negative effect from the pandemic in 2020. 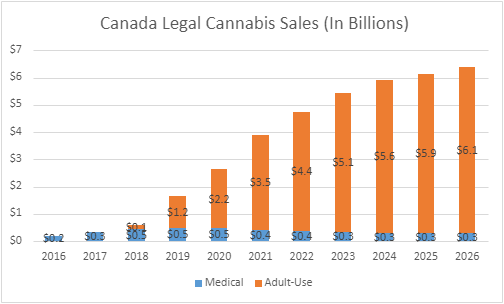 All figures in U.S. dollars

Canada’s “Cannabis 2.0” product expansion, which began late in the fourth quarter of 2019, yielded an explosion in available products beyond the previously available flower, pre-roll, oils and other limited-processing products. Based on BDSA’s retail sales tracking in Canada, category share appears to be trending toward that of established U.S. markets where BDSA has tracking.

While BDSA estimates flower held a 61% share of total Canadian sales in 2020, new product categories gained considerable share during the year—vape accounted for almost 12% total sales, edibles nearly 6%. Category share varied by province, based on availability, pricing and local regulations (e.g. vapes and many types of edibles are not available in Quebec’s adult-use channel.)

BDSA estimates that sales through Canada’s medical channel in 2020 were essentially flat (-1.5%) at $463 million, although the number of registered patients saw a resurgence in growth during the year. Patients grew by an estimated 8% in 2020, versus 2% in 2019. Year-to-date through September 2020, Health Canada reported increases in registered patients across most provinces, most significantly Quebec and British Columbia, two of the nation’s most-populous.

Canadian adult-use sales grew by 86% to nearly $2.2 billion in 2020. The COVID-19 pandemic had sporadic, brief impact in some provinces—such as Ontario which saw initial closures of physical retail. And, despite the pandemic, BDSA estimates physical retail share of total sales rose versus online sales—to nearly 90% versus 76% in 2019. That is expected, given the continued rapid expansion of the physical retail footprint in many provinces during 2020.

Nationwide, Canada’s adult-use channel added 279 new locations in just the fourth quarter of 2020, followed by 191 additional locations in January and February of 2021. Ontario has been approving new locations at an accelerating pace; the province authorized 131 retail outlets in 4Q 2020 and 140 more in Jan-Feb 2021. During that same time, British Columbia added another 85 government and private outlets (compared with Ontario’s 271 total).

BDSA forecasts total legal cannabis spending in Canada to reach nearly $6.4 billion in 2026, rising at a compound annual growth rate (CAGR) of 16%. Over that time, medical channel spending is expected to decline to $280 million (CAGR of -8%) while adult-use spending grows to more than $6.1 billion, CAGR of nearly 19%. In 2026, adult-use spending is expected to account for 96% of total legal cannabis spending.